General Authority Seventies serve the Church in numerous ways, often through leading in global areas or participating in general councils. When these leaders turn seventy years old, they are often released from this responsibility in the Church and granted emeritus status. BYU has been blessed to host many General Authority Seventies as devotional speakers, including five of the eight recently released leaders. To honor the service of these men and remember their gospel messages, we have compiled biographies of these emeritus Seventies, created summaries of their BYU devotional speeches, and included links to the speeches and related content.

Elder Christoffel Golden Jr. was born in Johannesburg, South Africa, in 1952. He married his wife, Diane, in 1981; they have four children. After graduating from the University of South Africa in Pretoria with degrees in political science and international politics, he worked in banking, pharmaceuticals, and marketing. Elder Golden served as a ward and stake Young Men president, institute teacher, bishop, stake president, and Area Seventy before his call as a General Authority Seventy in March 2001. He received emeritus status in October 2022.

In his BYU devotional, “To Know Thee, the Only True God,” Elder Golden discusses how the truths shared in the Restoration clarify the nature of God and help us understand our relationship with Him. Elder Golden invites us to come to know the Lord more fully through the Holy Ghost and testifies that “each one of us is in fact foreordained unto salvation and exaltation.”

Elder Walter F. González was born in Uruguay in 1952 and joined the Church at age eighteen. He married his wife, Zumal, in 1975; together they have four children. Elder González graduated in general studies from Indiana University and earned a technician’s certificate in business administration at CEMLAD Institute. He has served as a stake president, mission president, area public affairs director, regional representative, and Area Authority for the Church. He also served as the CES director for the South America North Area. Elder González was called as a General Authority Seventy in March 2001 and received emeritus status in October 2022.

In his BYU devotional, “A Brave Generation,” Elder González shares several of his life experiences of being in the minority as a member of the Church. He asserts that “it is certain that at some point you will be in the minority.” He then challenges us to be brave enough to break the chains that hold us back, defend righteous principles, and serve others.

Elder Weatherford T. Clayton was born in Los Angeles in 1952. He received a bachelor’s degree in psychology and a medical degree from the University of Utah. He has held numerous Church callings, including bishop, stake president, ward mission leader, and stake president. He recently served at Church headquarters in Salt Lake City as an assistant executive director in the Missionary Department and as the chairman of Missionary Health Services. He was called as a General Authority Seventy in April 2016 and was released during the October general conference in 2022. He and his wife, Lisa, have five children.

In his BYU devotional address, “The Rock of Our Redeemer,” Elder Clayton testifies that as we make Christ the cornerstone of our individual lives, “we cannot fall, regardless of what Satan does.” When we prioritize our discipleship by following the Savior in faith, we qualify ourselves to “return home to live with our Father again.”

Elder LeGrand R. Curtis Jr. was born in Ogden, Utah, in 1952. He received a bachelor’s degree in economics from Brigham Young University in 1975 and then received his juris doctor from the University of Michigan in 1978. He has served in numerous Church callings, including bishop, high councilor, counselor in a stake presidency, stake president, and president of the Italy Padova Mission. He was called to be a General Authority Seventy in April 2011, and he was released during the October general conference in 2022. He and his wife, Jane, have five children.

In his BYU devotional address, “Humbly Combining Heart and Mind,” Elder Curtis explores the connection between heart and mind in the scriptures and acknowledges both entities as essential to revelation. He also reminds us that as we pursue learning with both heart and mind, we need to “recognize the need for [God’s] wisdom in our lives.”

Elder Lynn G. Robbins was born in Payson, Utah, in 1952. He grew up in Springville, Utah, and was a childhood friend of his future wife, Jan; they have seven children. Elder Robbins received bachelor’s degrees in Spanish and political science from Utah State University in 1976 and an MBA in world business from the American Graduate School of International Management. Elder Robbins is a cofounder of Franklin Covey. He has served in various Church callings, including president of the Uruguay Montevideo Mission, and was called as a General Authority Seventy in April 1997. He served as a member of the Presidency of the Seventy from 2014 to 2018 and has served in Area Presidencies around the world. Elder Robbins was released in the October general conference in 2022.

In his 2013 devotional address, “Avoid It,” Elder Robbins addresses the topics of sexual purity and moral rectitude, centering his remarks on this principle: “It is easier to avoid temptation than it is to resist temptation.” He shares several strategies that the adversary uses to lure us into temptation or lull us into complacency and pairs them with prophets’ counsel to avoid making the first mistake.

In his 2017 devotional address, “Be 100 Percent Responsible,” Elder Lynn G. Robbins emphasizes the inseparable connection between three pairs of gospel principles: agency and responsibility, mercy and justice, and faith and works. Focusing on the first two pairs, he shares several examples and then concludes, “You cannot avoid responsibility without also diminishing agency. Mercy and justice are also inseparable. You cannot deny the Lord’s justice without also impeding His mercy.” 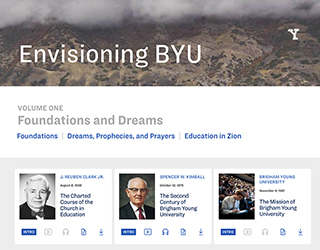