When Adversity Isn’t an Avalanche My phone buzzed. I looked down to see an email notification: “I’m sorry to report . . .” With my heart sinking, I opened up the full email. My class exception request had been denied.

Since October, I’d been struggling to create the perfect class schedule for my final semester at BYU. By December, I had gotten off the waitlist for an editing course. Everything was looking good, except for one class. I needed it to graduate, but it was throwing a wrench into my work schedule at a new internship. And it would be so nice to have three fewer credits in my final semester. With only a few weeks before the new semester, I submitted an exception request, hoping that my internship might be counted in place of this course.

Now here I was. After weeks of anticipation, during which I prayed and believed that my perfect plan would come to fruition, my hopes were dashed to pieces. I was disappointed and angry with myself and God. Hadn’t I worked hard in college? Didn’t I deserve an easier time and a more convenient schedule? Hadn’t I prayed that my plan would come about? Wasn’t I obedient? Didn’t I deserve blessings?

I spent the day internally stewing over my misfortune and what felt like betrayal from the Lord and from the education system. The only thing that gave me a glimmer of hope was submitting another exception request. It was a last-ditch attempt, a long shot, really (the deadline was the following day). But I felt that with my new plan, I had a solid chance: I would use the credits from a class I had taken previously to fulfill the requirement. After all, both classes used the same book and taught the same material—only the application of the material differed. Confident I had made a good case, I sent off my request, entrusting that the merits of my determination and persistence would get me what I wanted.

I felt bitter for a few days, especially while attending the class I’d tried to get out of. Slowly, though, I began to feel better. I started to recognize that even though my plan didn’t unfold the way I wanted it to, perhaps this was God’s plan unfolding for me the way He wanted it to. The class didn’t get more interesting, and I still had less time to spend at work. But as I prayed to accept God’s will, time was helping me adjust to this new plan and become more positive about it. Accepting God’s will didn’t take away the trial; it just made the trial easier to bear.

In her 2011 devotional, BYU professor Ramona O. Hopkins taught, “Adversity in some form will likely come into all of our lives. For some of us it might be a light dusting while for others it may appear as an insurmountable, all-encompassing avalanche. If we rely on the Lord, we not only can survive adversity, we can learn, grow, and thrive.” (“A Miracle in the Making: Finding the Meaning in Adversity”)

Having my request denied twice was the “light dusting” of adversity that Sister Hopkins identifies. In the grand scheme of my life, this difficult class schedule will be less significant than the “avalanche[s]” that will come. But the Lord isn’t only there for the avalanches. Wouldn’t our lives be strengthened if we relied on the Lord in all adversity—even the seemingly insignificant trials? We might even be better off, happier, and more faith-filled if we would make turning to the Lord a part of our daily practice, for surely there is some “light dusting” every day.

My schedule this semester turned out differently than I had planned, but it is also teaching me that there’s more than one way to have a good semester. Things don’t have to go my way to be good things. When the days get long, and I’m bouncing back and forth between work, classes, and homework, I am grateful that the everyday, “light dusting” of adversity gives me an opportunity to turn to my Heavenly Father and rely on him. 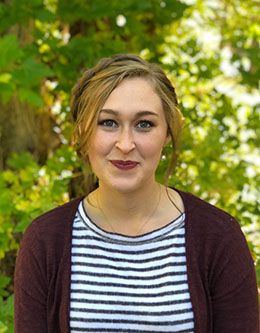 Courtney Larkin is an editorial intern for BYU Publications & Graphics. When she's not editing, she can be found binge-watching TV with her husband, contemplating the ins and outs of the Harry Potter universe, or eating buckets of popcorn.