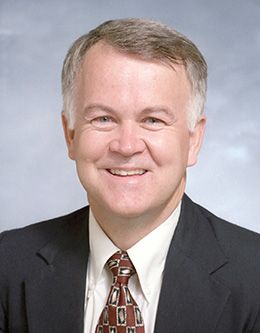 Currently a teacher in the Department of Educational Leadership and Foundations, A. LeGrand Richards has been a member of the BYU faculty since 1985. He has received graduate or postgradu­ate training at BYU, Harvard, and the Federal Republic of Germany’s University of Würzburg.
In his scholarly publications Dr. Rich­ards tries to question the assumptions of modern educational practice—as implied by his titles: “What If Students Had Faces?” “Nietzsche’s Herd Animal and American Teacher Training Programs,” and “Bureaucratic Epistemology: An Institutionalized Lie.”
An avid reader, Dr. Richards is pas­sionate about the philosophy of educa­tion and delights in watching student faces change from perplexity to insight. In 1994 he was elected president of the Far Western Philosophy of Education Society. He has just completed a translation from German of Winfried Böhm’s book What Is Christian Education? to accompany his previous translation of Theory, Praxis, and the Education of the Person. Currently he is writing the final chapter of Confessions of a Modern Scribe.
In the years since his full-time call to Scotland, Dr. Richards has served five stake missions and at this time is bishop of the Provo Franklin Ward. He presently serves in the community as vice chair of the Provo City Library Board. He is married to Cindy Orton, and they are the parents of Katie, Linda, Erika, and Lizi.