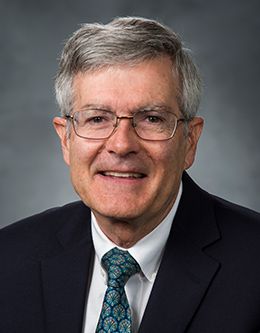 Alan Parkinson grew up in Salt Lake City and served a mission in central Japan in the early 1970s. He received his MS and PhD in mechanical engineering in 1979 and 1982 from the University of Illinois. He joined BYU shortly thereafter and has taught in the Department of Mechanical Engineering for 20 years. He served as chair from 1995 to 2001.
Brother Parkinson was appointed Dean of the Fulton College of Engineering and Technology in May 2005.  He teaches courses in the general area of engineering design. He has conducted research on new methods for com­puter-aided design, especially the application of optimization meth­ods to engineering design. He has received research grants from the state of Utah, Sandia National Laboratories, the United States Air Force, and the National Science Foundation. He is a coauthor of computer software for engineering optimization that has been used at many universities and companies in the United States and Europe. He has been an associate editor of the Journal of Mechanical Design and has also been chair of the Design Automation Conference and head of the Design Automation Committee.
Brother Parkinson  and his wife, Christina, have five daughters.

The Savior's Example in Doing the Father's Will