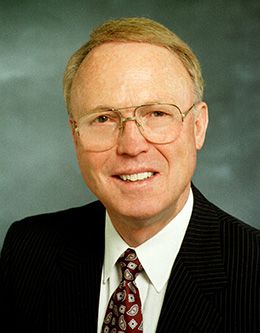 Dr. Alton L. Wade earned bachelor of science and doctor of education degrees from BYU and a master’s degree from Cali­fornia State University at Long Beach. He joined the BYU–Provo community fall semester of 1994, after serving as president of BYU–Hawaii for eight years. He was also president of Dixie College for five years. He served in vari­ous positions at the Church College of New Zealand and supervised CES pro­grams in the Pacific islands, Asia, South America, and the eastern United States.
Active throughout his life in civic and Church service, Brother Wade served in the Central States Mission. He has served as a branch president and stake president, as a member of the Utah Commission on Educational Excellence, and as president of the New Zealand Association of School Administrators. He was also a member of the Polyne­sian Cultural Center board of directors.
Dr. Wade served as vice President at BYU and retired after serving 31 years in the Church Educational System.
Dr. Wade is married to Diana Daniels Wade, and they are the parents of eight children.

“And Ye Shall Be Witnesses unto Me”