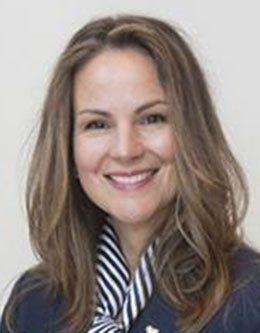 Amy Kunz grew up in a rural area near San Luis Obispo, California. She came to BYU, where she learned about the public relations major through an intimidating but intriguing presentation by Laurie Tucker Wilson. She entered the major and was mentored by Wilson as well as Larry Macfarland. Because of these mentors, she was able to gain amazing experience as a student. She represented BYU on the national committee of the Public Relations Student Society of America, and she completed an internship with the United Nations. This internship in New York City was a ceiling-buster for her, and from there she knew she could succeed anywhere.

Amy graduated in 1994 from the College of Fine Arts and Communications. Also graduating that year was Garth Fennegan. He had come to BYU, not a member of the Church, to play football. Although Amy admitted she wasn’t interested at first in a football player, the two met in a dorm lobby and began dating soon after. They had many gospel discussions, including a Gospel Essentials class that Amy taught and catered toward Garth. After a year at BYU, he joined the Church. Garth and Amy were married after graduation. “I came to BYU to play football,” he said, “but I received so much more.”

Garth and Amy Fennegan share this gratitude for BYU and have done tremendous amounts of work to give back to the university. Amy took a job with MBRK Advertising and Public Relations in Dallas, Texas. There, the Fennegans served for five years as the chairs of Dallas Fort Worth Chapter of the BYU Alumni Association, reaching out to alumni, organizing events, and bringing attention to the chapter. Meanwhile, Amy’s career progressed quickly. Within two years, she headed the firm’s growing technology public relations section, and in 1998, she began Amy Fennegan Communications. As a freelance marketing communications business, she attracts a variety of high-profile clients.

Amy Fennegan has found many ways to use her skills and enthusiasm to serve the Church and her community. She has served in the Primary, Young Women’s, and Relief Society auxiliaries and the multi-stake director of public affairs for the Dallas Area. In addition, she has participated on the Religious Faiths Advisory Committee to the Dallas Independent School District; now she is a member of the Thanksgiving Square Interfaith Council as well as two PTA boards. She is now the president of the BYU Alumni Association. Each year she welcomes new graduates into the Association and encourages them to stay connected in meaningful ways. She loves giving back to BYU, but what she loves most is spending time at her home in Dallas with her husband and their four children.

Part of Something Greater

Our Own BYU Stories