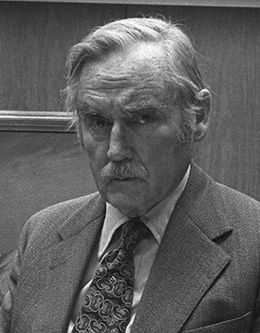 When Arthur Henry King passed away in January of 2000, his life was in an entirely different place than where it had begun—not only in the literal sense of emigrating from the United Kingdom to the United States, but in many other surprising ways.

Brother King was born in Hampshire, England, to a 300-year Quaker family legacy. His father passed away when he was very young, leaving Brother King to rely on scholarships given to the best and brightest students to fund his education. Supported by the Society of Friends, King excelled in his schooling and eventually attended the University of Cambridge and Lund University in Sweden, where he earned his doctorate of literature in stylistics.

After finishing his education, Brother King began focusing on educating the next generation. He began working as the assistant director-general of education in England. Later, he became an official in the British Council, a group concerned with the education of nations and people outside of Britain, where he served until 1971. For his work he was honored twice by the queen of England.

During his time with the British Council, Brother King’s life changed drastically. After losing his first wife in 1966, he met a woman of the LDS faith who would become his second wife. He was baptized shortly after. Following their marriage, he resigned from the British Council and accepted a position teaching English literature at Brigham Young University.

Brother King and his wife remained in Utah at BYU until 1986, when Brother King was called to be the president of the London England Temple. At the time of his passing, Arthur Henry King had published a great deal of his poetry and had become internationally known as both a poet and educator.

The Frost and the Thaw

Shakespeare and the Gospel