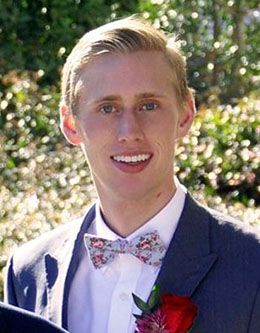 August 2018’s student commencement speaker and son of a world-traveling diplomat, Ashton R. Omdahl is an example of the dedication and intelligence of his graduating class. His varied accomplishments and interests have led to a well-rounded education at Brigham Young University. A quick look through his many achievements and heavy involvement at BYU explains why he acknowledges that students may feel “a little burnt-out at the end of this road to graduation,” as he says in his commencement address.

Ashton served in the Canada Edmonton Mission before receiving his bachelor’s degree in bioinformatics with minors in mathematics and computer science. While attending BYU, Ashton played the violin for the BYU University Orchestra, participated in the BYU Triathlon Club, and served as the president of the Bioinformatics Research Group. His time at the university was punctuated with “paradigm-shifting moments” that he says made up the “real BYU experience.”

A member of BYU’s honor society, he will be going on to study in the biomedical engineering PhD program at John Hopkins University. Thinking of the future, he says, “I commit to look forward, facing life’s truths with renewed resolve.”