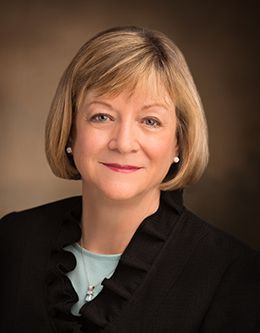 Sister Bonnie L. Oscarson’s favorite scripture is Doctrine and Covenants 101:16: “Be still and know that I am God.” Perhaps the commandment to “be still” had an especially large impact on Sister Oscarson because her family moved many times when she was young, living in five different places in the United States before she attended college. Born October 23, 1950, in Salt Lake City as Bonnie Lee Green, Sister Oscarson says that through all these relocations, her parents were examples of joyful endurance, always finding ways to make the move exciting for the family instead of stressful or daunting. They were also committed to building the kingdom wherever they were by making their home a place for fellowshipping new converts, newlyweds, the elderly, or anyone who needed a friend. The influence of her parents’ examples became evident as Sister Bonnie L. Oscarson grew into a woman dedicated to serving others.

Bonnie met Paul Oscarson at the temple site in Far West, Missouri, and they were married in the Salt Lake Temple in 1969. Suspending her education at Brigham Young University, where she had been studying commercial art, Bonnie moved with Paul near his hometown in St. Louis, Missouri. Continuing the transient lifestyle Bonnie had grown up with, they later lived in New Jersey, Massachusetts, and Texas. They now have seven children and many grandchildren. Thirty-five years after she left BYU, Sister Oscarson returned to finish her degree, graduating with an emphasis in British and American literature.

Just as her parents had done, Sister Oscarson and her husband served devotedly in the Church wherever they lived. She loved working with the youth, and she served three times as a ward Young Women president, twice as a stake Young Women president, and nine years as an early-morning seminary teacher. She enjoyed her time as a seminary teacher because it gave her opportunities to study and learn more about the scriptures. Sister Oscarson also served alongside her husband when he was stake president.

Early in their marriage the Oscarsons made their farthest move to preside over the Göteborg Sweden Mission from 1976 to 1979. Thirty years later, from 2009 to 2012, they returned to serve as the president and matron of the Stockholm Sweden Temple. Sister Oscarson is now fluent in Swedish and shares with her husband a love of the Swedish people.

Sister Bonnie L. Oscarson was called to be the Young Women general president for The Church of Jesus Christ of Latter-day Saints in 2013. Since 2015 she has also served on the Church Missionary Executive Council—and she was the first woman to do so. In her frequent addresses to the youth and women of the Church and to its members generally, Sister Oscarson emphasizes the importance of the family, sisterhood, and sincere belief and conversion in our lives. She is sweet but bold in exhorting members to service and greater faith. Her testimony of the Savior Jesus Christ and the restored gospel is clear, as is her love for those she serves.