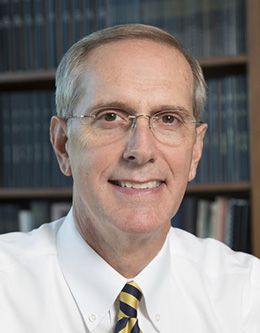 Brent W. Webb is a world-renowned mechanical engineer and scholar. As an educator and a scholar, he teaches students and faculty to love learning.

Brent Woodruff Webb was born August 26, 1956 and grew up in Lehi, Utah. He attended Brigham Young University, where he earned a bachelor’s degree in 1981 and a master’s in 1982 in mechanical engineering. From there, he went to Purdue University to pursue a doctorate. In his final year of graduate study, he was named a Presidential Young Investigator by the National Science Foundation. In 1986, PhD in hand, he returned to BYU to join the mechanical engineering faculty.

As a member of the faculty, Brent W. Webb has contributed an enormous amount to his field and to the university. His research focuses on heat transfer and thermodynamics. He has authored or co-authored over 200 publications, edited for two technical journals, lectured extensively in the United States and abroad, and served on several prominent scientific committees. Having directed over $5 million in research, he has developed software for modeling complex heat transfer issues in glass that is now used in American and Japanese industrial production. Likewise, his work on new modeling approaches for predicting heat transfer in high temperature gases has been adopted worldwide.

Never becoming too busy with scholarship to be an effective teacher, Brent W. Webb has been the research advisor for 30 master’s students, 12 doctoral students, and 3 post-doctoral fellows. He teaches rigorous and sought-after classes in the mechanical engineering department at BYU and has been awarded many prestigious honors from within and outside the university. He has served as the Executive Director of the BYU Office of Research and Creative Activities, the Associate Academic Vice President for Research and Graduate Studies, and served as the university’s Academic Vice President from 2011 to 2017.

Brent W. Webb uses his influence to motivate students and faculty. He has a firm belief that no matter how many scholarly attainments are made, the purpose of the university is to teach and to help others along their “quest for perfection and eternal life.” He also believes that, academically and spiritually, the key to success is the ability to turn failure into mastery. This balanced approach to life is evident in that alongside his professional accomplishments, he has devoted his time to service in The Church of Jesus Christ of Latter-day Saints as a Young Mens leader, bishop, high councilor, and stake president. He has dedicated even more time and priority to his loving family. He is married to Amy Jo Barker, and they have six children.

“The Lord Requireth the Heart and a Willing Mind”

“Quest for Perfection and Eternal Life”

“A Unique University in All of the World”

“Where There Is No Vision, the People Perish”

Repentance: A Mighty Change of Heart