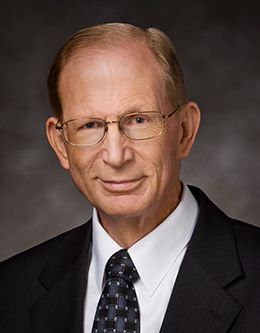 Bruce D. Porter was born in Albuquerque, New Mexico, on September 18, 1952, as the eldest of five children. While he was a young man, his family moved to Washington, D.C. for one year. “That move had a big impact on me. It widened my horizons,” he told the Church News. ”We had to travel long distances, which resulted in lengthy discussions about the gospel. That experience played a significant role in developing my testimony.”

Elder Porter married Susan Elizabeth Holland in February 1977, and they became the parents of four children. “Early in our dating, I was touched by his commitment to the gospel,” Sister Porter said in an interview with the Church News. “Since that time I have seen that commitment bless my life and the lives of our children.”

Prior to his full-time Church service, Elder Porter was a professor of political science at Brigham Young University. Before that, he was the Bradley Senior Research Fellow at the Center for International Affairs at Harvard, and had spent five years as executive director of the Board for International Broadcasting, which oversaw two broadcasting stations that penetrated the information blackout in Eastern Europe and the Soviet Union during the Cold War.

“I’ve visited Russia many times in the past few years,” Elder Porter told the Church News in 1995. “I have a great love and admiration for the Russian people, who have suffered so much.”

Later, while serving in the Europe East Area, he participated in a 25th Anniversary Gala Concert celebrating the day the Church was officially registered in Kyiv, Ukraine. “This was a truly milestone event, which is hard for me to praise enough in words,” he said in a Church News article. “Ukraine is ahead of many countries in regard to freedom of religion. You are blessed to live here and to have the opportunity to believe and worship ‘according to the dictates of [your] own conscience.’ Please remember how blessed you are.”

In his most recent general conference address, “Beautiful Mornings,” given in April 2013, Elder Porter said, “We need not fear the future, nor falter in hope and good cheer, because God is with us.”

“Did You Think to Pray?”

A Child Is Born