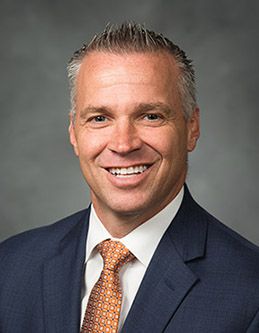 Shane Reese is a BYU professor of statistics and was appointed Academic Vice President on June 3, 2019. Raised in Albuquerque, New Mexico, Shane returned to BYU after serving a two-year mission to Taipei, Taiwan. Upon returning from his mission, he pursued his wife, to whom he will be married for 20 years this December.

Reese received his bachelor’s and master’s degrees in 1994 and 1995 from Brigham Young University in statistics and his PhD from Texas A&M University in 1999, also in statistics. His research interests include the application of statistics to physics experiments, national security problems, climate and environmental issues, and sports. He enjoys teaching at all levels of statistics— including Bayesian statistics—from teaching small groups of graduate students to teaching introductory statistics to students in the JSB Auditorium. A recipient of the BYU Young Scholar and Maeser Excellence in Teaching awards, he was recently elected a Fellow of the American Statistical Association.

Shane has enjoyed serving alongside the youth in the Church. He is currently the Young Men president in the Mapleton North Stake. In his free time Shane enjoys playing basketball, coaching various sports for his children, and spending time with his family.

He and his wife, Wendy, are the parents of three children.

On the Uniqueness of BYU

On the Measurements We Make in Life