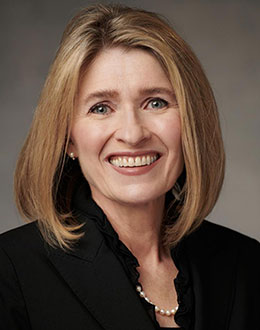 Camille Neddo Johnson was sustained as Primary general president for The Church of Jesus Christ of Latter-day Saints on April 3, 2021. Born on September 12, 1963, in Pocatello, Idaho, she is the oldest of three children born to Hal and Dorothy Neddo. President Johnson has a strong pioneer heritage on both sides of her family, and hearing stories of their faithful journeys across the plains enriched her childhood. President Johnson’s family moved often when she was young, which allowed her to experience life in Idaho, Germany, Texas, and Utah.

During her time in law school, President Johnson was introduced to Douglas R. Johnson. They began dating and were sealed in the Salt Lake Temple on July 31, 1987. They are now the parents of three boys.

In 1989, President Johnson graduated from the University of Utah with her law degree. She then worked as a lawyer for over 30 years at the law firm of Snow Christensen & Martineau and recently served as president of the firm.

From 2016 to 2019, President Johnson and her husband lived in Peru while he served as the president of the Peru Arequipa Mission. This would prove to be a very difficult time for President Johnson, who spoke no Spanish before their call to serve. Because she spoke little Spanish, President Johnson had to simplify the words of her testimony in order to share it. Focusing on the “primary” components of the gospel proved to be beneficial when she was later called as Primary general president.

In her current calling as Primary general president, President Johnson continues to blend her career with her faith. In her October 2021 General Conference talk, the newly called President Johnson spoke about the differences between a trial witness and the witness we can gain through the Holy Ghost. During the talk, she urged us to “let Christ be the author and finisher of [our] stor[ies].”1

Bound Securely to the Savior