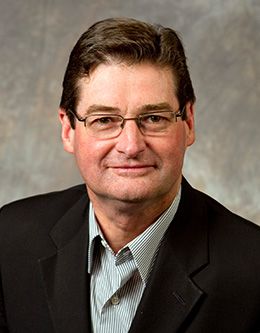 Dr. Campbell B. Gray was born in Sydney, Australia. His parents later met the missionaries of The Church of Jesus Christ of Latter-day Saints and were baptized. He served a mission in New Zealand and received his bachelor’s degree from the City Art Institute, Sydney College of Advanced Education; his master’s degree in philosophy from the University of New England, Armidale, Australia; and his doctorate in art history from the University of Sussex, Brighton, England.
His early career focused on art museum education and director­ship, including the position of inaugural director of a government-sponsored art museum within the Sydney, Australia, metropolitan area. He subsequently turned to academia and became co-chair of the Department of Visual Arts and later coordinator of the graduate research department of the College of Visual and Performing Arts of the University of Western Sydney. He was named director of the BYU Museum of Art in November 1996.
Dr. Gray is married to Jeanette Gray.

An Inquiring Mind and Heart