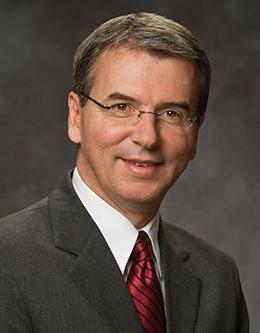 In his teenage years, Carlos A. Godoy accompanied his sister to a Church activity she had been invited to as her a chaperone. He was impressed by what he saw and quickly started taking lessons from the missionaries. He was baptized in 1977 at the age of 16. Soon after, he met Mônica Soares Brandao, another young convert, at a stake activity. The two were married a year after they served in the Brazil Sao Paulo South Mission in 1984. They now have four children.

Elder Godoy earned his bachelor’s degree in economics and political science from Pontifícia Universidade Católica de São Paulo. After he graduated, Elder Godoy began working while serving as the bishop of his ward. In his 2014 general conference address, “The Lord Has a Plan for Us!” Elder Godoy talks about how it was at this time in his life that a friend reminded him of the promises in his patriarchal blessing. Inspired, he applied to the BYU and packed up his young family.

At BYU, he earned a master’s degree in organizational behavior and began managing company and human resources until he started his own consulting firm, CHANGE Consult-Organizational Development, in 2004. His career was mirrored by his service in the Church. He served as young men president, elders quorum president, missionary training center branch president, bishop, high councilor, regional welfare agent, president of the Brazil Belem Mission, and Area Seventy in the Brazil Area. In 2008, Elder Godoy was called as a General Authority Seventy.

In his BYU devotional “Enter to Learn; Go Forth to Fight!” he speaks of the many experiences that brought him to where he is and how BYU’s motto can inspire us to realize our life’s purpose. Elder Godoy says, “Before this life we were prepared for this time and we have a mission to fulfill,…It is with this big picture in mind that we should guide our decisions and plans, even our careers and temporal goals.”

Enter to Learn; Go Forth to Fight!