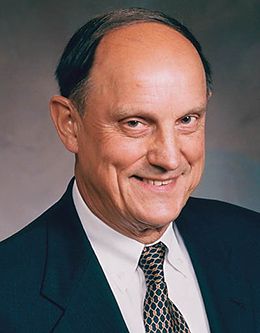 In 1957, twenty-two-year-old Charles A. Didier was attending the University of Liege in Belgium. While there, he made two very important decisions that would impact the rest of his life: he chose to pursue a degree in economics and to be baptized into The Church of Jesus Christ of Latter-day Saints. Didier was the only member of the Church in the university, and there were only 150 members of the Church in that district in Belgium; nevertheless, his faith never wavered, and he has been able to valiantly serve the Lord ever since.

A native of Belgium, Charles Amand Andre Didier was born on October 5, 1935, to Andre Didier and Gabrielle Colpaert. Didier’s mother, two brothers, and sister also joined the Church, and his sister served a mission. One of her companions was Lucie Lodomez, with whom Didier had been acquainted previously. Didier and Lucie were reunited after her mission and were married soon thereafter; they are the parents of two sons.

Although there were few members of the Church in his native country, Didier had many opportunities to serve his fellow brothers and sisters in Belgium. He was the president of the Liege branch, a regional representative, and the president of the France/Switzerland Mission from 1970 to 1973. Didier, who is quadrilingual, then became the European manager of Translation and Distribution Services for the Church in Frankfurt, Germany.

In 1975 Didier was called as a member of the First Quorum of the Seventy, becoming the first General Authority in this dispensation who was a resident of Europe. His service took him far away from his European roots as he was made president of the South America North Area in 1984, which included Peru and all other Spanish-speaking nations north of it as well as Portuguese-speaking Brazil. Following his service In South America, Elder Didier became a member of the Presidency of the Seventy in 1992 while simultaneously serving as the general president of the Sunday School organization. He was again called into the Presidency of the Seventy in 2001 and served there until 2007; he was granted emeritus status in 2009.

Years after they were given, Elder Didier’s devotional addresses at Brigham Young University remain popular, teaching with parables and power the importance of choosing to live righteously in a turbulent world.

Our Spiritual and Temporal Foundation: Scriptures and Revelation

“Where There Is No Vision, the People Perish”

“Where the Spirit of the Lord Is, There Is Liberty”

The Art of Living