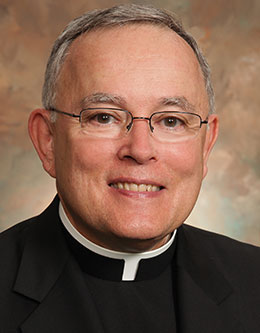 Charles J. Chaput is many things—a member of the Order of Friars Minor Capuchin, archbishop, political activist—but perhaps one of his most unique features is that he is the second Native American to be a consecrated bishop and the first Native American archbishop in the Catholic Church.

Charles Joseph Chaput was born on September 26, 1944, in Concordia, Kansas, to Joseph and Marian Helen Demarais Chaput. His father is French Canadian, a direct descendant of King Louis IX, and his mother is a Native American of the Prairie Band Potawatomi tribe. Chaput was enrolled in the tribe as a young boy, taking the name Pietasa, meaning “rustling wind.”

Although there are very few Native American Catholics, Chaput attended Our Lady of Perpetual Help Grade School in Concordia and then, upon deciding at age thirteen that he wanted to become a priest, studied at St. Francis Seminary High School in Victoria, Kansas. In 1965 at age 21, Chaput entered the Order of Friars Minor Capuchin in Pittsburgh, Pennsylvania. Three years later, he made his solemn profession as a Capuchin friar.

Chaput continued his studies and graduated with a bachelor of arts in philosophy from St. Fidelis College and Seminary in Herman, Pennsylvania, and he also completed studies in psychology at Catholic University of America in Washington, DC. He earned a master of arts in religious education from Capuchin College and another master of arts in theology from the University of San Francisco in 1971. Since then, he has held various positions at many Catholic institutions.

Archbishop Chaput holds patriotism in high esteem. “At its best,” he says, “America is an exceptional country.” Growing up post-World War II, Chaput inherited a “spirit of patriotism.” His patriotic zeal is manifest in the political spectrum as he vocally and fearlessly defends his theological beliefs. He is known for his strong opinions that uphold the doctrines of the Catholic Church. During his forum address at Brigham Young University, he urged members of the Catholic Church, The Church of Jesus Christ of Latter-day Saints, and other Christian denominations to work together and live their faith and testimonies.

Awakenings: Living as Believers in the Nation We Have Now