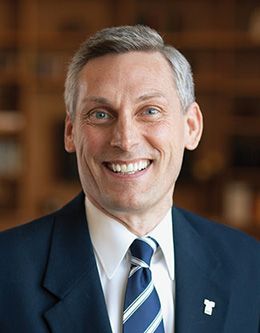 Chris Feinauer served as president of the BYU Alumni Association from 2010 to 2012. During this time, he gave four commencement speeches to graduating students. He gave advice about pursuing goals to their fruition and being a good representative of BYU after graduation. Feinauer’s passion for his alma mater and the students who currently attend is unparalleled and left a definitive mark on students.

Feinauer originally hails from a small town in Oregon where his parents moved when they immigrated from Germany. Thanks to some of his dedicated Church leaders who were BYU fans, Feinauer made the decision to attend BYU. After working hard to get in, he was accepted and began his schooling. Feinauer graduated from BYU with his degree in business management in 1980. While attending school, he met his wife on the International Folk Dance Ensemble. They are the parents of five children, all of whom are grown and pursuing their individual careers.

After graduating from BYU, Feinauer entered the workforce with a job in banking. Though he expected to move on quickly, he is still there today. He enjoys spending time on his hobbies, which include classic cars and home remodeling. The latter is a passion his wife shares, and they enjoy spending time together on something they both love. He also served in the BYU Management Society where he mentored students in their career searches.

Feinauer hopes to return to BYU after he retires to work in philanthropy. His passion for service affected many lives during his time as Alumni Association president and will undoubtedly continue to do so as he continues to be a part of BYU’s alumni.

Till the Clock Reads Double Zero