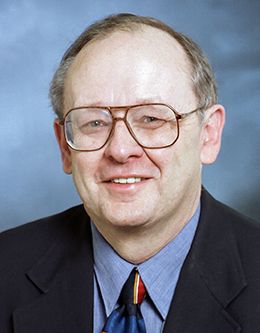 Clayne L. Pope received his Bachelor of Fine Arts from Brigham Young University in 1965. After graduation, he attended the University of Chicago where he received his Graduate and Doctorate degrees in 1968 and 1972. Dr. Pope first came to BYU as a visiting lecturer during the summer of 1968 and went on to teach at the University of Michigan from 1969-1970. Following his tenure at Michigan, Dr. Pope returned to BYU teaching in the department of Economics until 2008. His particular area of expertise is Economic History, and he has taught courses in Economics Principles, Economic History, Economic Theory, and American Institutions. He was the Chair of the Department of Economics from 1975‑1977 and served as the Dean of the College of Family, Home and Social Science from 1993-2001. He has served as research associate for the National Bureau of Economic Research since 1979 and was named the Zina Card Williams Young Professor of Economics in 2002.  He taught at BYU until 2008.

“Remember That Ye Are Free to Act for Yourselves”