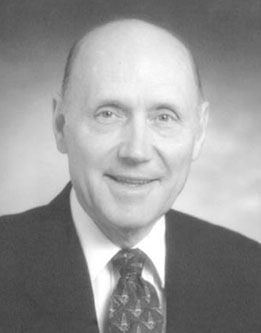 Clayton S. Huber was born in Lapoint, Utah. He received BS and MS degrees from Utah State University and a PhD degree in food sci­ence from Purdue University in 1968.
He received a commission as an officer in the U.S. Army in 1963 and was assigned to the U.S. Army Natick Laboratories in Massachusetts. His research focused on military and space food systems, including the Gemini Program.
From 1968 to 1975 he directed research programs for food and packaging systems for space flight (Apollo, Skylab, Apollo-Soyuz) at the Johnson Space Center, Houston, Texas. He has also worked for several food corporations and has been a consultant for food processing projects in several foreign countries.
In 1976 he joined the faculty at Brigham Young University and served 12 years as chair of the Food Science and Nutrition Department and 10 years as dean of the College of Biology and Agriculture. In 1999 he received the Abraham O. Smoot Citizenship Award from Brigham Young University for distinguished service. In 1993 he was designated as a fel­low in the Institute of Food Technologists for his contributions in food science and technology.
From 1958 to 1960 he served as a missionary in the West Central States Mission. He has served as a bishop and as a stake president and is currently an Area Authority Seventy in the Utah South Area.
He and his wife, Beth, are the parents of seven children and have several grandchildren.

He Hears and Answers