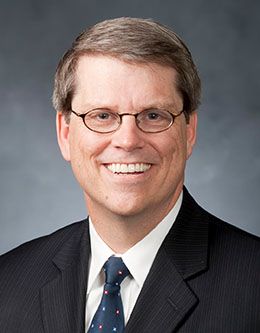 Gordon Smith is descended from a long line of dairy farmers in Wisconsin. Although he never mastered milking a cow, he inherited a passion for cheese.

He first moved from Wisconsin to BYU when his best friend—the only Mormon in his high school class—convinced him that BYU was a perfect fit for an agnostic with no discernible life goals. One thing led to another, and in his sophomore year at BYU he was baptized in the Jesse Knight Building. The following year he embarked on a mission to Vienna, Austria. He returned to BYU, where he met his future wife, Sue Mumford, and graduated from the BYU School of Accountancy. But he wanted to become a lawyer.

At the University of Chicago Law School he was introduced to law and economics and discovered a passion for legal scholarship. After clerking for a federal court of appeals judge in Louisiana and working several years in the Delaware office of an international corporate law firm, he commenced an academic career. His second move from Wisconsin to BYU came in 2007, when he left the University of Wisconsin Law School for a position at the J. Reuben Clark Law School. His research focuses on contracts, corporate law, and law and entrepreneurship.

Gordon and Sue are the parents of six children. He currently serves as the bishop in his home ward.

What's in a Name?