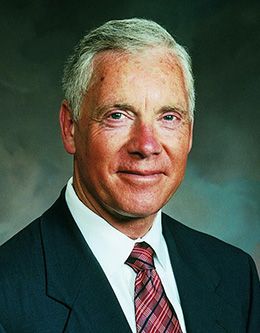 Elder Dale E. Miller was sustained as a member of the Second Quorum of the Seventy on April 5, 1997, during the 167th Annual General Conference of The Church of Jesus Christ of Latter-day Saints. He served as president of the Chile Area, as a counselor in the North America Southwest Area presidency, and as executive director of the Audiovisual Department.
His assignments included executive director of the Priesthood Department, member of the Information and Communications Committee, and chairman of the Seventies Committee for worldwide lead­ership training, and president of the North America East Area.
He was a CEO and business adviser to new venture companies, a cofounder of Zenger-Miller, and an executive with Syntex Pharmaceutical Corporation.
He is a former Area Authority, mission president, stake president, bishop, and stake high councilor.
He received a bachelor’s degree in business from Brigham Young University and a master’s degree in international management from the University of Southern California.
Elder Miller was born in Los Angeles, California, on April 2, 1936. He married Laurel Chandler on June 24, 1960. They are the parents of five children and have 20 grandchildren.