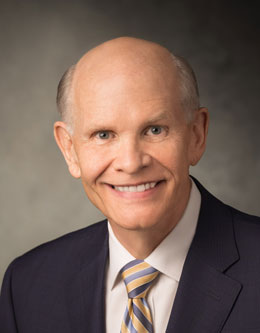 Ashley, the only child of Dale Gunnar and Ruth Lybbert Renlund, says that her father “has a big heart” which is “full of love.” A cardiologist by profession, Elder Renlund’s impressive knowledge about the heart is only surpassed by the strength and compassion of his own. When he worked as a physician, his coworkers couldn’t help but notice the singular concern he had for them and for their families, as well as his willingness to go far beyond the norm in the care of his patients. In his “extraordinarily fulfilling career,” Dale G. Renlund says, “one learns to care about people and how to solve problems,” traits that would bless his life an others in many ways.

Although he was born in Salt Lake City, Utah (on November 13, 1952), Dale and his siblings grew up speaking Swedish, the native language of their parents. From Sweden and Finland, they had bravely emigrated from Stockholm to Utah, despite speaking hardly and English and having very little support, in order to be sealed in the temple. That heritage was strengthened by three years of living in Sweden while Dale’s father, a skilled carpenter, served a building mission for The Church of Jesus Christ of Latter-day Saints. There the children not only were educated in a Swedish-speaking school, but Dale had one of his first educational experiences with the Book of Mormon thanks to the challenge of a stake youth leader.  Dale read and prayed about the book, receiving a personal and undeniable witness of its truthfulness. That testimony was augmented by the centrality of the scriptures in their home.

Connections to Sweden continued when Dale Renlund was called to serve there as a missionary in 1972—in the same mission as his brother. When he returned home, he attended the University of Utah, where he would earn his bachelor’s degree in chemistry as well as his medical degree. He also met Ruth Lybbert there. He recalls the devastation of asking her out and being turned down; in her version of the story, she was delighted to be asked out by him but simply had a time commitment that required her to decline. From both perspectives, however, there is gratitude that he had the courage to try again a few months later. Dale and Ruth Renlund were married in 1977 in the Salt Lake Temple, the beginning of a truly remarkable team.

Their teamwork was needed immediately. After earning his MD, Elder Renlund began further training and a residency at Johns Hopkins University in Baltimore, Maryland. In his third year of residency, he was called to be the bishop of a newly formed congregation. He served in that capacity for three years, which he claims aged him and his wife ten years but “turned out to be a glorious experience.” He later served as a stake president, another calling which prepared him to be a general authority.

As a cardiologist, Elder Renlund specialized in heart failure and heart transplantation. He took a position as a professor at his alma mater; he also served as the Medical Director of the UTAH Cardiac Transplant Program. During this already busy time, his family experienced a trial that he says “changed the course of [their] lives.” Sister Renlund was diagnosed with ovarian cancer. Her battle required two surgeries and nine months of chemotherapy; all the while the prognosis was uncertain. Elder Renlund found his soul stretched as he strove to take care of her and their young daughter, and he also admired the strength and faith she kept: “She’s my hero,” he says.

Not only did Ruth endure the trial, but decided to go to law school to take her mind off of it. She excelled, her career culminating in her position as the president of her law firm and a member of several prominent boards. Her husband acknowledged hers as the “greater sacrifice” when they both left their careers to accept a call to serve in the Africa Southeast Area Presidency. There, they report, they were “tutored by the saints about what really matters.” In one memorable experience, Elder Renlund asked a congregation of saints in the Congo to tell him about the challenges they faced because he wanted to be of help. One brother responded, “How can we have any challenges? We have the gospel of Jesus Christ.” The Renlunds grew to deeply love the Saints in Africa: “They have nothing, but they have everything.”

In 2009, Elder Renlund was called as a member of the Seventy, and six years later in 2015, he accepted the call to serve in the Quorum of the Twelve Apostles. “Wherever the sweet spot is between apoplectic and catatonic, that’s where I was,” he recalls; but after his initial reaction to the call came an assurance that the Lord—and his family—would sustain him. His testimony of the Savior’s love is a powerful force in the Church: “We must recognize that the Savior helps everyone. Saints are sinners who keep on trying. There is something about seeing people as Heavenly Father sees them—as a beloved son or daughter of Heavenly parents, and as such, with divine potential. All true followers need to plead for that pure love of Christ that He does give. God is so mindful of individuals, and status doesn’t matter. Faith and hope matter. He knows His children one by one.”

Creating and Conveying a Christlike Culture: More Than a Job