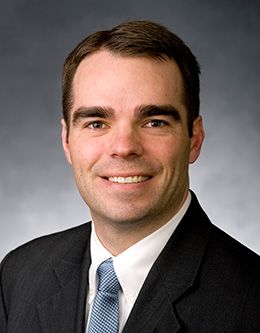 Dallan Moody, from Kennewick, Washington, received a BS degree in statistics with a minor in mathematics from BYU in 1998. He later received an MBA degree from Utah State University in 2008.

Following his graduation from BYU, Dallan worked for TenFold Corporation, a technology company based in Draper, Utah, specializing in large-scale software applications. He then spent six years working for the LDS Church audit department in Salt Lake City. While working for the Church, Dallan passed the Certified Internal Auditor exam and performed audits in various places throughout the world.

In 2008 Dallan joined BYU Athletics as the associate athletic director over finances, merging two of his great passions—numbers and sports. He is primarily responsible for overseeing the day-to-day financial operations of the Athletic Department, including scholarships, accounts payable, and budgets. He also works closely with athletic director Tom Holmoe, putting contracts together for upcoming football games.

Dallan served a full-time mission to London, England; has served as a bishop in Orem; and currently serves on the audit committee of his stake and in the high priest group leader-ship in his ward.

Dallan and his wife, April, are the parents of four boys, ages five through 12, who are all enthusiastic BYU fans.

What Happens When Life Gets One Degree Colder?