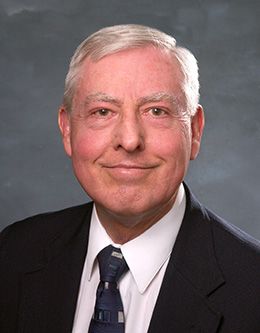 Dana T. Griffen is a professor of geology specializing in mineralogy and crystallography. He received his bachelor’s degree from the U.S. Naval Academy at Annapolis, Maryland, and served four years aboard U.S. Navy ships during the Vietnam era. He then earned mas­ter’s and doctoral degrees in geo­logical sciences from the Virginia Polytechnic Institute and State University in Blacksburg, Virginia.
Following two years in a temporary faculty position at BYU and two years in Bartlesville, Oklahoma, as a research geologist with Phillips Petroleum Company, he joined the BYU faculty perma­nently in 1979. He has served as chair of the Department of Geology and an associate dean in the College of Physical and Mathematical Sciences.
Brother Griffen was born in Washington, DC, and raised in the Maryland suburbs of the nation’s capital. He is married to Berva Baird of Goshen, Idaho.

Choices and Changes, Burdens and Blessings