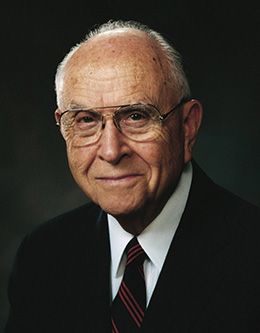 Elder David B. Haight once read in a newspaper the story of a young man who had drowned in an attempt to rescue others in danger. Though he did not know the young man or his family, he was so touched that he attended the funeral to reach out in sympathy to the parents. That experience led to the family’s return to the gospel, and Elder Haight was later able to officiate in their sealing. Though he held many important callings and positions, Elder Haight was a man more concerned with people than with prestige. “The Lord isn’t going to be concerned about whether you were a bishop, or [a] stake president, or [an] Apostle,” he said. “He’s going to be concerned about how you treated people.” His heart was deep, and his compassion changed lives.

A child and grandchild of pioneer settlers, David Bruce Haight was born on September 2, 1906, in Oakley, Idaho. Like his pioneer forebears, he was no stranger to loss; early in his life, he lost his father and four of his siblings to illness. Despite—or maybe because of—his own trials, he set about to serve others from a young age.

David B. Haight attended Utah State University, and upon graduation he began managing department stores. A young woman named Ruby Olsen applied to work at one of the stores he managed; he recognized her as the cute, high-spirited girl he had recently seen at a dance. He asked her out, and shortly thereafter the two fell in love. David and Ruby were married in the Salt Lake Temple in 1930, and together they raised three children.

At the outbreak of World War II, David B. Haight had already held several callings within The Church of Jesus Christ of Latter-day Saints and was serving in a bishopric. Like many others, he left his family to serve his country; he served in the United States Navy as a lieutenant commander. While serving in the military, Elder Haight encountered a pivotal moment, wherein he committed to dedicate his life even more fully to the Lord.

Once back to his career, David B. Haight worked at the executive level for department stores in Utah, California, and Illinois before eventually owning a chain of retail stores himself. His capacity for leadership and his desire to serve were evident everywhere he went. In addition to presiding over the Palo Alto Stake in California, he was the mayor of Palo Alto from 1959 to 1963. During his second term, though the city council objected, he left office to answer a call to serve as the president of the Scottish Mission. David Haight always put the Lord first.

Elder Haight also served as a regional representative and an assistant to the Quorum of the Twelve Apostles before he was called in 1976 as a member of the Twelve. After many years of faithful service, Elder David B. Haight passed away in Salt Lake City on July 31, 2004. He was 97, the oldest Apostle in the history of the Church. His beloved Ruby passed away less than 5 months later. At the time of Elder Haight’s death, 18 grandchildren and 78 great-grandchildren had been added to their legacy.

Elder Haight’s humble, down-to-earth manner makes his bold and bright testimony all the more brilliant. His many addresses at BYU demonstrate his deep faith and his determination to live up to the commitment he made early in his life to follow the Lord.

Go Out into the World

The Streams of Your Life

Our Faith Is Centered on the Living Christ

“By Their Fruits Ye Shall Know Them”

“The Uttermost Part of the Earth”

Your Purpose and Responsibility

Come, Listen to a Prophet’s Voice