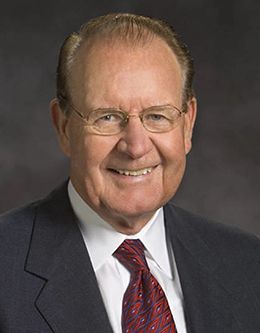 David E. Sorensen was born on a farmstead in Aurora, Utah, that influenced much of his life. From his time working on the farm came experiences that inspired many of the talks he gave within the Church, including his counsel in his general conference address “You Can’t Pet a Rattlesnake” and his devotional speech “Put Away Childish Things” which both relate childhood experiences with snakes and black powder to avoiding sin and temptation.

At age 19, Elder Sorensen served a mission in the Central Atlantic States for two years before being drafted into the United States Army. Upon returning home, he married his sweetheart, Verla Anderson Sorensen, in the Manti Utah Temple. Over the years, the two had seven children. Elder Sorenson served in a number of Church callings, including president of the Canada Halifax Mission.

After a successful business career honored by the Brigham Young University Marriott School of Management, Elder Sorensen was called to the Second Quorum of the Seventy in 1992. Upon his call, he sold his business to serve as Area President in the North America West and the Asia North Areas, as well as the executive director of the Church’s Temple Department. Under the direction of President Gordon B. Hinckley, Elder Sorensen oversaw the development of the new standardized temples, helping to build 61 temples in just four years.

In 2005, Elder Sorensen was granted general authority emeritus status and was called as the president of the San Diego California Temple. His work in San Diego, as well as throughout the rest of the world, blessed the lives of countless members of the Church.

The Blessing of Work