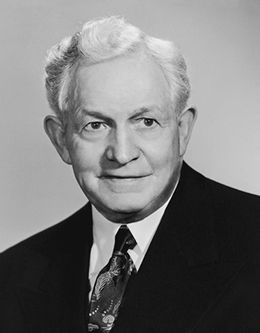 While serving as a young missionary in Great Britain, David O. McKay found this motto inscribed on a building in Scotland: “What E’er Thou Art, Act Well Thy Part.” McKay adopted this as a source of inspiration, and through all of his roles—husband, educator, and prophet—he dedicated his life to acting his part to the best of his abilities.

David Oman McKay was born on September 8, 1873, in Huntsville, Utah. The eldest son of David and Jennette Eveline Evans McKay, convert immigrants from Scotland and Wales respectively, young David grew up with a strong gospel foundation in his home. His childhood was not, however, without hardships. His two older sisters grew ill and passed away within days of each other. Only a year later, his father was called to serve a mission in Scotland, leaving seven-year-old David to help man the family farm. Despite the challenge, the farm prospered during this time, and so did young David McKay. Through the examples and testimonies of his parents, he was taught Church principles, gospel doctrine, and life lessons.

David’s maternal grandmother bequeathed a substantial sum of money to help educate the McKay children, making it possible for David O. McKay and three of his siblings to attend the University of Utah, and David graduated from the university as valedictorian and class president in 1897. While at the university, David and his brother rented a house from Emma Robbins Riggs. Her daughter, Emma Ray Riggs (named for a ray of sunshine), became acquainted with David O. McKay, and during his missionary service in Great Britain, the two frequently corresponded through the mail. Their relationship blossomed upon his return home, and they were married on January 2, 1901, in the Salt Lake Temple—the first couple to do so in the twentieth century. David and Emma would eventually become the parents of seven children and their sixty-year union would become an example for many to emulate.

In 1928 David O. McKay began teaching at Weber Stake Academy and then was appointed to be the principal there. He encouraged women to gain an education and the number of female students greatly increased during his tenure. He also used his expertise as a professional educator while serving in the Weber Stake Sunday School Presidency, where he began developing new programs and curricula aimed at improving teaching and learning.

On April 9, 1906, at the age of thirty-two, McKay was called to be an apostle. However, because of his work with the Weber Stake Sunday School, he was also sustained as the second assistant to the General Sunday School superintendent and revolutionized the Sunday School lessons throughout the entire church. He wrote Ancient Apostles, one of the first Sunday School lesson manuals, to establish uniform lessons, and he continued to write lessons for several years. Additionally, McKay built LDS seminaries near high schools throughout Utah and transferred three LDS colleges—Dixie College, Snow College, and Weber State University—to the state of Utah. He then oversaw Brigham Young University’s transformation into a four-year university; the BYU McKay School of Education was named after him in honor of his service.

As an apostle, Elder McKay was assigned to take a worldwide tour of the Church’s missions. Together with Hugh J. Cannon, he traveled approximately 61,646 miles, opening a mission in China and visiting places such as Palestine, Hawai’i, and the islands of the South Pacific. From 1923 to 1925 Elder McKay was called as the president of the European Mission and he moved to the British Isles, where he first coined the slogan “Every member a missionary,” which would come to define his ministry.

In 1951, at age seventy-seven, David O. McKay became the ninth president of The Church of Jesus Christ of Latter-day Saints and served in this capacity for almost twenty years. During his presidency, the Church experienced a wave of missionary efforts: the First Presidency introduced the first official proselyting plan, comprised of five discussions of the basics of the gospel, and a language training institute was erected for the full-time missionaries. As membership in the Church grew, new international stakes were established and President McKay traveled to meet with Church members and dignitaries all over the world. He oversaw the dedication of five temples during his tenure, two in the United States (the Los Angeles California and Oakland California Temples) and three internationally (the Bern Switzerland, London England, and Hamilton New Zealand Temples). Although the Church was growing globally and rapidly, President McKay continually emphasized the importance of family. He is well-remembered for teaching that “No success can compensate for failure in the home.”

On January 18, 1970, President McKay passed away at the age of ninety-six. A beloved leader in all aspects of his life, President McKay’s memory lives on through the programs he established and the legacy of love and service he gave to the Church. Between 1951 and 1965 President McKay delivered nine addresses at BYU devotionals. Decades after they were given, his words continue to inspire generations.

Something Higher Than Self

Whither Shall We Go?

Each Age Carries Own Responsibility

God Our Father: His Gospel Plan

Five Ideals Contributing to a Happy and Enduring Marriage

Eternal Truth Will Guide Us