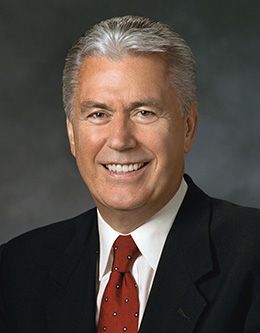 Born on November 6, 1940, in Ostrava, Czechoslovakia, Dieter F. Uchtdorf had a childhood colored by the horror of World War II. His father was conscripted into the German Army, and his mother relocated the family to Zwickau, Germany. There an elderly woman standing by Dieter’s mother in a food line invited the Uchtdorf family to sacrament meeting, beginning the family’s investigation of The Church of Jesus Christ of Latter-day Saints. At the close of the war and after being reunited with their father, the Uchtdorfs moved again, this time to Frankfurt. President Uchtdorf often relates his family’s several relocations as formative experiences that have bolstered his compassion for those who find themselves under the wide umbrella labeled “refugees.”

When he was a teenager, a small family moved into Dieter’s branch at church. Through Mutual Improvement Association meetings, he met one of the daughters, Harriet Reich, whom he immediately wanted to get to know. After several years of courtship, Dieter and Harriet were married, and he calls her the “sunshine of his life.” (She jokingly adds to that title: “Yes, and on occasion his thunderstorm too.”)1 They have two children, who describe their parents as always being there for them and making life exciting. Dieter and Harriet now have a growing number of grandchildren and great-grandchildren. They count travel, outdoor activities, the arts, and time with their family among their greatest enjoyments.

Dieter proved himself to be especially bright at a young age, and he developed a fascination with flying. He pursued an education in engineering and then served for six years in the German Air Force. He also earned his wings in the United States Air Force in Big Spring, Texas. He helped build a Church meetinghouse while in Big Spring, and years later, as a General Authority, he rededicated the renovated building.

Dieter’s career took off when he began working as a pilot for Lufthansa German airlines. Within five years and at the young age of 29, he became a captain. Two years later he became manager of the 737 fleet, and at one point he successfully diffused a hijacking. In 1975 he directed Lufthansa’s premier training school in Arizona, and seven years later he became vice president of flight operations and chief pilot.

Even though he was a gifted pilot, Dieter did not allow his demanding career to stop him from giving himself to build up the Church in the politically and economically scarred area of central Europe. He served as a stake president in both the Frankfurt and Mannheim Stakes before being called as a General Authority in 1994. Since then Elder Uchtdorf has traveled to build and bless the Church, his service only amplified with his subsequent calling to the Quorum of the Twelve in 2004. He also served in the First Presidency for ten years from 2008 to 2018.

Although his life in the last few decades has been occupied by full-time Church service, Elder Uchtdorf still holds a great love for flying—and that regard is well known. Worldwide, members of the Church look forward to his stories of flying and the spiritual analogies he draws from them. Knowing this, Elder Uchtdorf once remarked, after beginning a talk with a nonflying analogy, “At this point some of you may be thinking, ‘that’s all very fine and good, but what does it have to do with flying an airplane?’”2 Amidst the chuckles, he proceeded to relate his earlier analogy to one about flying.

Listeners love Elder Uchtdorf for his simple and optimistic approach to the gospel. With his eloquent manner yet down-to-earth humor, he frequently urges individuals and families to go back to the basics in practicing their faith and prioritizing their lives. His testimony of God’s unconditional love for each individual is the focal point of his counsel.

Five Messages That All of God’s Children Need to Hear

Can You Hear the Music?

As You Embark upon This New Era

The Wind Beneath Your Wings