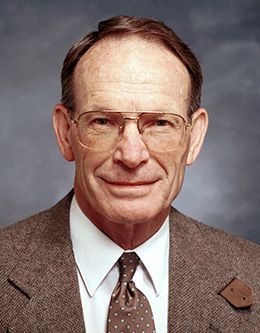 Dr. Donald N. Wright earned his bachelor of science degree at the University of Utah (1958) and his PhD at Iowa State University (1964). He also studied at the University of Washington and at Temple University. From 1958 through 1969 he served on active duty as an officer in the United States Navy.
Prior to going to BYU, Dr. Wright was a clinical professor of pathology at the University of Utah Medical School, chief of the Bacteriology Division of the U.S. Naval Biological Laboratory, and director of the Clinical Microbiology Laboratory at the Veterans Administration Hospital in Salt Lake City. He also served on the Utah County Board of Health for 15 years, eight of them as its chair. Dr. Wright was one of the original chairmen of the BYU Department of Microbiology.
A fellow of the American Academy of Microbiology, Professor Wright is author or coauthor of two textbooks and has written 91 research publica­tions. He has served on the universi­ty’s Faculty Advisory Council and as chair of the Microbiology Department.
In the Church, Brother Wright served as a high councilor, stake Young Men president, stake presi­dent, and bishop. He and his wife, June, have six chil­dren.