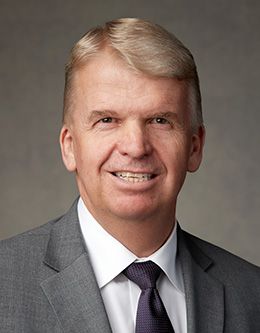 Douglas D. Holmes was born on February 27, 1961, in Salt Lake City, Utah, and grew up in nearby Cottonwood Heights. He served as a missionary for the Church in Scotland and Ireland. While he was away, his father was called to the bishopric in a YSA ward. When Douglas returned, he began attending that ward, and there he met Erin Sue Toone (whose father was also in the bishopric). They were married in 1985 in the Salt Lake Temple and have raised six children together.

The following year, Brother Holmes graduated with a bachelor’s degree in family science from Brigham Young University and then stayed to earn an MBA. After working as a management consultant for three years, he began a career in the telecommunications industry. In 2000 he left a position as the executive vice president for MediaOne Group for self-employment as a developer and investor.

Brother Holmes has never let himself be too busy to serve. His Church callings have included serving in ward and stake Young Men presidencies, bishoprics, and elders quorum presidencies; teaching gospel doctrine; and serving as ward mission leader. He presided over the Michigan Detroit Mission from 2010 to 2013. He was in a stake presidency when he was extended the call to join the Young Men general presidency in 2015. Brother Holmes has also been active in the community, serving on the boards of nonprofit organizations such as the United Way of Davis County, Parents for Choice in Education, Safe Harbor Women’s Shelter, and the Academy for Creating Enterprise. His work and service have taken him and his family to Michigan, Texas, Colorado, Washington, Massachusetts, and various places in Utah.

Douglas D. Holmes’s connection to BYU has remained strong throughout his life. Besides being an alumnus and a parent of BYU students, he has described himself as a “devotional junkie.” He remembers defining moments during university devotionals and forums and continues to feel those moments of inspiration by staying tuned in to BYU Speeches. He has now contributed his own powerful testimony and gospel insight to the collection, extending the blessings of his leadership and teaching to the university and its friends worldwide.

The Doctrine of Christ: Our Daily Walk