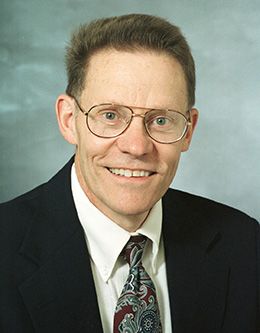 Dr. Earl M. Woolley was born and raised in rural Utah. He served a mis­sion to Ontario, Canada, then earned his bachelor’s and PhD degrees from BYU in the 1960s, followed by postdoctoral work at the National Research Council of Canada. He joined the Department of Chemistry and Biochemistry faculty at BYU in 1970. He served as department chair from 1989 to 1995, when the Benson Science Building was planned and built, and he became college dean in 1999.
Dean Woolley has researched solu­tion chemistry and chemical thermo­dynamics since his undergraduate days at BYU. He is author or coauthor of 70 journal articles and one book, and he has been an officer in national and international scientific organizations in chemical thermodynamics, calorime­try, and solution chemistry.
Brother Woolley met his wife, Anita Christensen, in a BYU chemistry class. They are the parents of eight children, all of whom attended BYU.