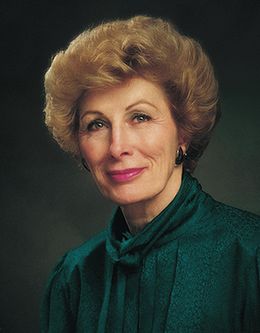 The descendant of faithful pioneers who settled farther north than the rest of the Saints, Elaine Low was born on March 22, 1928, in Cardston, Alberta, Canada. Growing up, she was surrounded by strong Latter-day Saint influences: her parents, Sterling Oliver and Lovina Anderson Low, were stalwart members and her grandfather was a patriarch—when she was young, Elaine would transcribe the patriarchal blessings given by her grandfather. To top it all off, the family lived less than a block away from the Cardston Alberta Temple.

Upon graduating as valedictorian from her high school class, Low moved to Utah to attend the University of Utah, where she majored in English. There, she met senior medical student Joseph E. Jack. The two fell in love, and they were married on September 16, 1948, in the Cardston Alberta Temple. Eventually their family expanded to include four sons, which meant that the Jack family often participated in active outdoor activities such as skiing, golfing, rappelling, and hiking.

Because of her husband’s medical career, the Jack family lived in various places around the United States. Although no longer surrounded by valiant Church members in the comfort of Utah or Cardston, Jack still did her best to live the gospel. While the Jacks lived as newlyweds in Staten Island, New York, attending church meant enduring public transportation for three hours roundtrip every Sunday. “I remember bearing my testimony in a fast and testimony meeting in Manhattan and realizing that I really did have a testimony or I wouldn’t be making the effort to be there,” says Sister Jack. The Jack family also resided in Boston, Massachusetts, and Mt. Edgecumbe, Alaska, where the nine-person branch seemed more like a “twig.” The branch met in the Jack home and it was “a time of testimony strengthening.”

Also during her tenure, the Relief Society curriculum changed to center around the words of latter-day prophets. When the organization celebrated its 150th birthday, the sesquicentennial celebration involved service projects carried out around the globe as well as a Relief Society broadcast, which included ten major cities outside of the United States. Upon Sister Jack’s release as Relief Society general president in 1997, she and her husband served as the temple president and matron of the Cardston Alberta Temple until 2000.

Sister Jack has given six BYU devotionals, and her addresses focus on charity, sisterly (and brotherly) kindness, and being patient on our journey back to Heavenly Father. Her encouraging words continue to inspire listeners today.

“All This Way for That?”

Charity: How We Treat Each Other