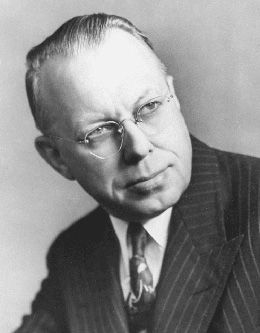 Students, faculty, and visitors alike have spent countless hours in the Ernest L. Wilkinson Student Center (affectionately called the “Wilk”), the hub of all student activity since its construction in 1964. While the Wilk itself is well-known and well-loved by many, its namesake—BYU president Ernest L. Wilkinson—left a legacy as long-lasting as the building that bears his name.

Ernest Leroy Wilkinson was born on May 4, 1899, in Ogden, Utah. After graduating from Weber Academy in 1917, he joined the Student Army Training Corps unit at Brigham Young University, the beginning of a lifelong association with the university. Wilkinson served with the army until the end of World War I, then enrolled as a student at BYU. There he met Alice Valera Ludlow, a talented drama major from Spanish Fork, Utah, and the two fell in love. They were sealed by James E. Talmage in the Salt Lake Temple on August 16, 1923 and would become the parents of five children.

For several years, Wilkinson had been his sharing ideas about BYU’s future with Church leadership, and in 1951 he was appointed as president, succeeding interim president Christen Jensen. President Wilkinson’s twenty-year tenure at BYU could be described with one word: growth.

Due to a number of factors including the work of his predecessors, the growth of the Church, and a nationwide economic upswing, President Wilkinson was able to complete a $100 million building plan, constructing seventy-seven permanent and eighty-two temporary buildings to house eight new colleges as well as other projects. The enrollment of the university increased dramatically (by nearly five times), and the faculty expanded both in number and in qualification, with 54% holding doctorate degrees. The number of graduate degrees increased ten times and the traveling performing groups and athletics received national recognition. However, one of President Wilkinson’s proudest achievements was establishing wards and stakes to serve the students; in 1971 there were ten stakes and 104 branches.

President Wilkinson stepped down in 1971 and passed away in Salt Lake City seven years later on April 6, 1978.

Highlights in the Ninety-Nine-Year History of BYU

The Unique Role of BYU among Universities of America

The Importance of Honor