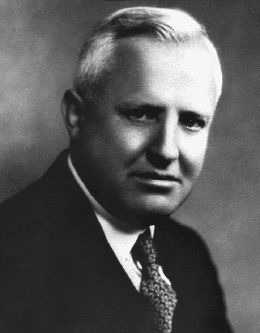 The Harris Fine Arts Center on BYU campus is not only a beautiful building dedicated to the arts but a lasting tribute to the achievements of BYU’s longest university president, Franklin S. Harris.

Franklin Stewart Harris was born in the small rural community of Benjamin, Utah Territory, on August 24, 1884. When he was a boy, his family moved to the Mormon colonies in Chihuahua, Mexico. Both of Harris’s parents were educators, and his father taught at Juarez Academy. At age twenty, Harris followed in his father’s footsteps and also began his teaching career at Juarez Academy. He left the academy in 1907 to return to the United States and earn his bachelor’s degree at Brigham Young University. Harris then furthered his education by earning a PhD in agronomy from Cornell University, becoming a professor of agronomy and an agronomist at Utah State Agricultural College (USAC). By 1920 he was the head of the Department of Zoology and Entomology at USAC and the president of the American Society of Agronomy.

At the age of thirty-six Harris was offered the chance to succeed George H. Brimhall as the president of Brigham Young University. After mulling over the decision for a few days, Harris accepted the offer and went on to serve in that position from 1921 to 1945—the longest administration in BYU history.

In 1923, President Harris declared, “Behold the greatest university campus in all the world—in embryo. More students will come, the faculty will be enlarged, new colleges will be added, and there is no end to the improvements which can be made. Truly the campus is the setting of what will undoubtedly be the greatest university in the world, a place to train for leaders.”

During his tenure, President Harris did everything in his power to help the school reach its full potential. He helped it attain four-year college status and then university status, and divided high school and college students into separate buildings. He increased the university’s prestige by recruiting prominent Latter-day Saints and individuals with doctorate degrees to the faculty. President Harris is also responsible for instituting special devotionals and forums, founding the College of Fine Arts, and building the first purpose-built BYU library (in the Heber J. Grant building).

In addition to his administrative duties, President Harris continued as an active agronomist. He published more than 200 scientific articles and traveled around the United States and to Japan, the Soviet Union, and Iran (where he later served as branch president) and other parts of the Middle East to do agricultural research and make recommendations for agricultural improvement. He shared his knowledge at other universities and gathered information about other institutions to implement at BYU.

Called back to his agricultural roots, President Harris resigned from BYU in 1945 to become the president of USAC. Long after he left the school, his contribution has remained significant. In the BYU Speeches archives, we have a devotional address by President Harris that encourages students to earn, love, think, appreciate, and worship on the journey of life.

The Journey of Life