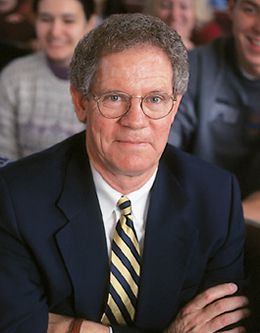 Gary K. Palmer grew up in South Ogden, Utah, and graduated from Weber High School in 1959. After completing a mission to Western Canada he received his bachelor’s and master’s degrees from BYU in 1966 and 1967.
Dr. Palmer then moved to Columbia, South Carolina, where he was the city’s assistant superin­tendent of parks and recreation. He returned to BYU and worked for six years as the university’s director of intramurals before being named an associate dean for the College of Health and Human Performance. While serving in this capacity he pur­sued a doctorate of education, which he received in 1981.
While serving as a professor, Dr. Palmer made presentations across the country with titles like Laughter and Fun in Your Lifestyle and Feeling Great: Laughing All the Way!  His teaching excellence is evidenced through his various honors, including the Recreational Management and Youth Leadership Teacher of the Year Award and the College of Health and Human Performance Outstanding Teacher Award.
Dr. Palmer has served as president of the Utah Parks and Recreation Association and as vice president of recreation for the Southwest District Alliance for Health, Physical Education, Recreation, and Dance.
He and his wife, Shirley, reside in Orem, Utah.

The Spokes of a Balanced Life