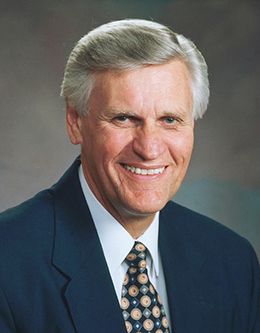 Born in Provo, Utah in 1940, Elder Glenn L. Pace was lifted and encouraged by the examples of righteous men and women around him. They inspired him to lead a life of dedicated service. This life of service began as a missionary in the New England States Mission in 1960. On returning home, he married Jolene Clayson in the Salt Lake Temple. Over their 54 years of marriage, the two had six children and served in a variety of offices in and outside of the church. Much of their family life is described in his General Conference addresses and BYU speeches.

Before leaving for missionary service, Elder Pace had made the decision to pursue a bachelor’s degree in accounting at Brigham Young University when he returned home. He worried about this decision after receiving his patriarchal blessing. In his blessing, he was promised that the Lord would use his career to bring about His divine purposes. Although unsure how God would use an accountant, Elder Pace went on to receive both his bachelor’s and master’s degrees in accounting from BYU. His education gave him the opportunity to work for several prestigious accounting firms and to become the managing director of the Welfare Service department of the church. In his devotional speeches, he bears testimony of how the Lord has continuously guided his career to bless the lives of others.

In 1985, he was called as a counselor in the presiding bishopric where he served for seven years before being called to the First Quorum of the Seventy. As a seventy, Elder Pace served over the North America Northwest Area, North America Northeast Area, Africa West Area, and as the mission president of the Australia Sydney North Mission. Although his call into the presiding bishopric initially caused him worry—he’d never served as a bishop prior to the call—he served faithfully in the presidency and then as a general authority until 2005 when he received emeritus status.

Shortly before receiving emeritus status, Elder Pace suffered a heart attack and subsequent surgery that significantly changed his health. This experience impacted him for the rest of his life. He passed away in 2017 after continued cardiac difficulties.

The Divine Nature and Destiny of Women

“Your Work Is Not Yet Finished”

Crying with the Saints