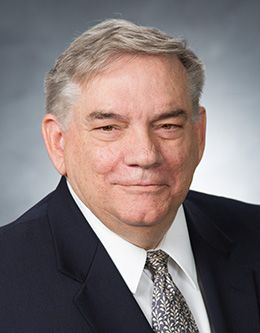 Dr. James E. Faulconer earned a BA in English from BYU and MA and PhD degrees in philosophy from Pennsylvania State University. In 1975 he joined the BYU faculty, where he has served as Philosophy Department chair and as associate and act­ing dean of General Education and Honors before his recent appointment as dean.
With a career Army officer for a father, Professor Faulconer attended schools in Japan, Germany, and Korea (where he graduated from high school) as well as in several U.S. states. He joined the Church in 1962 while living in San Antonio, Texas, and served a mission to Korea from 1967 to 1969.
As a professor of philosophy, his special­ties are contemporary Continental philoso­phy, the philosophy of social science, and the history of philosophy. Most of his many publications have dealt with the implications of philosophy on psychological theories. He is the editor of Epoché: A Journal for the History of Philosophy. He has been named Honors Professor of the Year, an Alcuin Fellow, and a Karl G. Maeser General Education Professor—some of the univer­sity’s highest faculty recognitions.
Faulconer is married to the former Janice Allen.