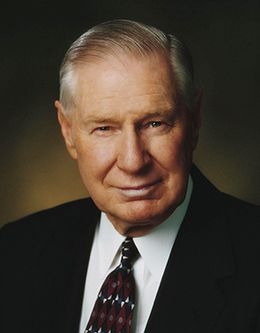 The author of the words to the hymn “This Is the Christ,” President James E. Faust was full of unequivocal faith in Jesus Christ and His gospel, as well as commitment to following the example of the Savior in leadership and compassion. His many devotionals at Brigham Young University give insight into his character and testimony, and they continue to help readers and listeners find happiness through living the principles of the gospel.

James Esdras Faust was born July 31, 1920, in the small town of Delta, Utah. He spent much of his childhood there before his family moved to the southern part of the Salt Lake Valley. There he attended Granite High School, where he lettered in football and won awards for track. It was also there that he met his sweetheart, Ruth Wright.

James attended the University of Utah, where he continued to run track, but he left to serve a mission for The Church of Jesus Christ of Latter-day Saints in Brazil from 1939 to 1942. Soon after he returned, he left to serve in the United States Army Air Corps during World War II. When he was discharged, he held the rank of a first lieutenant.

While on leave from the military in 1943, President Faust and Ruth were married in the Salt Lake Temple. He wrote a letter to her every day for the rest of the duration of the war. The Fausts raised five children together, and at the time of his death they had a legacy of twenty-five grandchildren and even more great-grandchildren. President Faust always felt that his first responsibility was to his family. When first called as a General Authority for the Church, he said, “I want my children to know . . . that they will always be paramount in my life.”

President Faust graduated from the University of Utah in 1948 with both a bachelor’s degree and a juris doctor degree. He then began working at a law firm in Salt Lake City. His aptitude for law and his reputation for honesty and moral fortitude earned him many civic responsibilities. In 1962 he was elected president of the Utah Bar Association, and later that decade he was named to the Utah Legislative Study Committee and the Utah Constitutional Revision Commission. He served in the House of Representatives for the 28th Utah State Legislature and as the chairman of the Utah Democratic Party. He was also appointed to the Deseret News board of directors.

President Faust’s abilities and character won notice at the national level as well. He served as an advisor to the American Bar Journal, and United States president John F. Kennedy appointed him to the Lawyers’ Committee for Civil Rights and Racial Unrest. His service was recognized in 1996 when the Utah Bar Association awarded him the Distinguished Lawyer Emeritus Award, and in that same year the Utah National Guard awarded him the Minuteman Award. He was also made an honorary citizen of São Paulo, Brazil, and received a national Brazilian citizenship award.

In 1949, at the age of 28, President Faust was called to serve as the bishop of his ward. He then served as a stake high councilor, stake president, and regional representative. He served with empathy, had a great ability to listen, and took seriously the opportunity to learn from the example of the Savior. In 1972 he was called as an assistant to the Quorum of the Twelve Apostles, and in 1976 he was called to the Seventy. With the mind of a lawyer and the heart of a Church leader, President Faust often demonstrated his ability to be a peacemaker. He helped in negotiations for the BYU Jerusalem Center and worked to build bridges between the Church and leaders and communities of other faiths. He also presided for a time over the Church in Brazil and in Africa, which deepened his love for the people of both places and created opportunities for important consultations with President Spencer W. Kimball that led to the 1978 revelation on the priesthood.

In 1978 President Faust was called to the Quorum of the Twelve Apostles, where he served until 1995 when he became the Second Counselor in the First Presidency, serving with President Thomas S. Monson and President Gordon B. Hinckley. Together they were the longest continuous serving First Presidency in the history of the Church.

President Faust passed away in his home in Salt Lake City, Utah, on August 10, 2007, and Ruth passed away only six months later. President Faust’s life and testimony were congruent and filled with family, faith, and service.

The Value of Self Esteem

Come Out of the Darkness into the Light

Our Search for Happiness

We Believe in You!

Trying to Serve the Lord Without Offending the Devil

The Voice of the Spirit

A Message to Our Granddaughters

A Testimony of Christ

The Blessings of Adversity

The Odyssey to Happiness