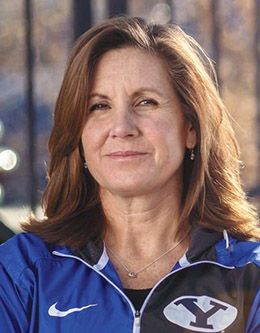 Completing her 21st season in 2015, head coach Jennifer Rockwood has taken the BYU women’s soccer team to national prominence and has established herself as one of today’s premier coaches of Division I soccer. She built up the program from an extramural sport into an elite NCAA competitor.

This past season the Cougars won their fourth-consecutive WCC championship and earned a trip to the NCAA for the 17th time in 21 years. They have had winning seasons for 20 of those years, and they have ranked in the NCAA top 25 15 times, including for the last four years.

Rockwood graduated in 1989 with a degree in business from the Marriott School of Management. The Lake Oswego, Oregon, native was a four-sport athlete in high school, playing soccer, softball, basketball, and track. She taught middle school physical education, math, and history for eight years and has coached at the youth, high school, and Olympic Development Program levels.

Drawn to the Light