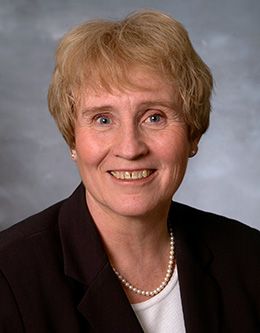 Joan W. Young earned a BA in English and an MBA from BYU. She was involved in education for many years, focusing most recently on international business and leadership training. She began her career at the Marriott School in 1997 as assistant direc­tor of the MBA program.
In 2000 Joan was appointed director of the Marriott School’s Undergraduate Management Program. She was also been heav­ily involved in the Marriott School’s Asia business study pro­gram. She planned and led student visits to Japan, China, Hong Kong, Bangkok, Singapore, and Vietnam. She also served as the faculty advisor for the Women in Management Club and was recognized with the 2003 Marriott School’s Administrative Excellence Award.
In addition to her academic career, Joan co-owned and managed the Della Fontana Restaurant in Salt Lake City.
Joan has been actively involved in athletics and has coached swimming, water polo, and foot­ball. She served as coach for the USA South women’s water polo team at the 1994 Olympic Fest in Colorado.
Joan and her husband, Glen, have six children.

Seeing as Far as Forever