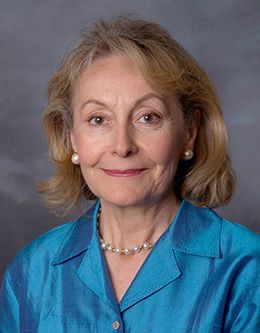 Joaquina Hoskisson is a native of Spain. Her parents moved to Uruguay, where she attended the Universidad de la Republica in prelaw and law studies. She attended BYU and earned a BA in Spanish, minoring in French. She then completed her MA in Spanish teaching and linguistics, minoring in teaching English as a second lan­guage. She has also attended the University of Zurich, taking courses in Spanish linguistics and Italian.
Her part-time BYU position teach­ing in the Spanish and Portuguese Department became full time in 1990. She served as associate department chair from 1995 to 2003.
Joaquina’s academic interests are in oral proficiency testing and language for the professions. She has taught grammar, writing, business language, and Iberian culture and civilization courses. She has also directed several Study Abroad pro­grams to Madrid, Spain. She is also an ATA-accredited Spanish-English translator who has done occasional conference interpreting.
Sister Hoskisson and her husband, BYU ancient studies professor Paul Y. Hoskisson, are the parents of four children.

“For to Sojourn in the Land”