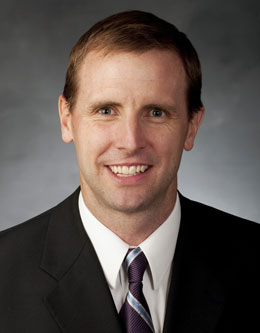 Donald L. Staheli Professor and Associate Dean in the Marriott School of Business

John B. Bingham is a professor of organizational behavior and human resources at BYU, as well as an associate dean in the Marriott School of Business. His non-linear path to his current positions reflects his wide variety of interests, as well as his ability to receive and follow guidance from the Lord. His higher education began with a Spanish degree from the University of Utah in 1998, which was followed by a master’s degree in parks, recreation, and tourism. Dr. Bingham’s adventurous nature was obvious in the things he did outside of school, as well. He took a study abroad to Mexico, worked as a backcountry guide and ski patroller, and founded a technology company and two other start-ups. But right at what seemed like the height of John’s success and adventure, he said, “things changed . . . I began having impressions that I should return to school, complete a PhD, and, of all things, become a professor.”1 Dr. Bingham attributes some of these impressions to a General Conference talk by President Hinckley, who emphasized the importance of getting as much education as possible.

After receiving the revelation that he needed to get a PhD, Dr. Bingham and his wife soon found themselves at Texas A&M “in the middle of a hot, and sweaty, August.”2 Though it was an overwhelming and busy time in Dr. Bingham’s life, he learned to see God’s hand through it all, and eventually landed a job at BYU, which has been a surprising blessing in his life. He says, “Every year, the uniqueness and the power of BYU and its students to really influence peoples’ lives for good and benefit the world becomes more and more apparent to me.”3 And Dr. Bingham has played a significant role in that influence that extends from BYU and its alumni. Past students regard Dr. Bingham as one of the most caring, fair, and engaging professors they ever had in college.

Dr. Bingham’s passion and hard work have been recognized professionally, as well. Dr. Bingham is Donald L. Staheli professor, which is “the result of a generous endowment from Donald L. Staheli [who was] chairman and CEO of Continental Grain,” as well as a member of the Second Quorum of the Seventy.4 Dr. Bingham’s research focuses on “employment exchange, employee proactive and unethical behavior, and the effects of mission-driven organizations on employee engagement and workplace culture”5 and has been published in and recognized by leading management journals and popular news media outlets.

Dr. Bingham and his wife, Amy, live in Utah with their five children. Though Dr. Bingham is a professor, he and Amy still love to take outdoor adventures with their family.

In Awe: The Astonishing Goodness of God