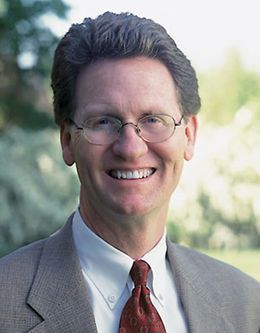 As associate advancement vice president since July 1998, John C. Lewis oversees BYU’s alumni and external relations efforts. He carries direct administrative responsibility for the BYU Alumni Association, Public Affairs and Guest Relations, Special Events, Publications and Graphics, and Licensing and Trademark Administration. He is also pub­lisher of the popular university alumni magazine, BYU Magazine.
Prior to his current assignment, Brother Lewis was director of public and alumni relations for the Marriott School of Management.
His career has included service with Mountain Bell and WordPerfect Corporation, where he became executive vice president and a member of the board of directors. After WordPerfect’s merger with Novell, Inc., he became a senior vice president responsible for customer service worldwide. He left Novell in 1995 to become vice president of corporate development at Nu Skin Enterprises.
Brother Lewis has also been a marketing instructor in the College of Business at Westminster College. He holds a BA in English and an MBA from Brigham Young University as well as an MA in English from the University of Virginia.
He and his wife, Ann Laemmlen, are the parents of three children.

The Thoughts of Our Hearts or Why Do We Do What We Do?