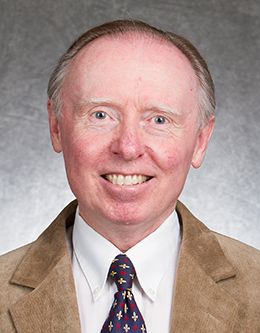 John D. Lamb was born in Ontario, Canada, in 1949 and served a mis­sion in northern Italy in the early 1970s. He received his PhD in chem­istry in 1978 at BYU. He worked as a program manager at the United States Department of Energy and joined the BYU faculty in 1984. He held a joint appointment as the BYU executive director of Research and Creative Activities from 1984 to 1992.
Dr. Lamb is editor of the Journal of Inclusion Phenomena and Macrocyclic Chemistry. He has served as a visiting professor at three universities in Italy, one in Germany, and one in China. Dr. Lamb is a recipient of the BYU Outstanding Achievement in Sponsored Research Award, the Karl G. Maeser Excellence in Research and Creative Arts Award, an Alcuin fellowship, and was Carnegie Professor of the Year for 2000. He has published over 150 papers in the peer-reviewed chemistry research literature in the area of macrocycle-based separa­tions. He has served as chair of the BYU faculty advisory council and of the Utah Science Advisory Council.
He is currently a member of the LDS Church Manuals Writing Committee and sings baritone with the Mormon Tabernacle Choir. Dr. Lamb and his wife, Betty, have six sons. In December 2001 he became a citizen of the United States.

"All Ye Need to Know"

Witnesses in Stars and Stones