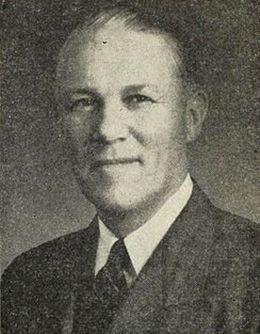 During his tenure as a general authority seventy and extending to just before his death, John Longden spoke twelve times at Brigham Young University. His boldly delivered addresses reveal the high standards he held for himself and for his audience. He believed in the immense potential of each child of God, and encouraged those who heard him to work hard to achieve that potential.

John Longden was born on November 4, 1898, in Oldham, Lancashire, England to Thomas J. Longden and Lizette Taylor. He was raised by parents were members of The Church of Jesus Christ of Latter-day Saints, and in 1909 his family immigrated to the United States, settling in Utah. He received a degree from the University of Utah and worked in management with Westinghouse Electric Supply Company.

From 1921 to 1924, John Longden served as a missionary for the Church in the Central States Mission. The year of his return, he married Frances Larue Carr in the Salt Lake Temple. They raised three children together. He and his family were devoted to service and leadership in the Church; Sister Longden served for thirteen years in the General Young Women Presidency and Loren C. Dunn, the husband of one of the Longden daughters, became a general authority seventy like his father-in-law.

John Longden served as a bishop and stake president before being called as an assistant to the Quorum of the Twelve Apostles in 1951. In that capacity, he was also an advisor to the Church Welfare Committee. He passed away in Salt Lake City on August 30, 1969. Through service and sermon, Elder Longden has left a deep mark on BYU and its audience.

The Magic Spirit of Christmas

The Power of Self-Control

The Ingredients of Love

The Lord Is My Shepherd; I Shall Not Want

Are You Doing the Best You Can?

Time Is of the Essence

A Latter-day Saint—Always a Missionary

The Letter Killeth, but the Spirit Giveth Life