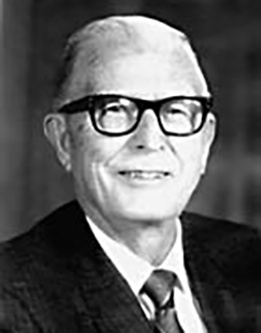 Born in 1889 to Isabella and George Anderson, Joseph Anderson was the youngest of eleven children on the family farm in Roy, Utah. At birth, Brother Anderson’s mother intended to name him after the Prophet Joseph Smith, but settled for just “Joseph” for modesty’s sake. Naming the young child after a prophet served to be more fitting than she could have ever known as Brother Anderson went on to serve with seven of the then thirteen presidents of the Church as secretary to the First Presidency, assistant to the Quorum of the Twelve Apostles, general authority seventy, and member of the First Quorum of the Seventy.

Brother Anderson gained his education at Weber State Academy, graduating in 1905. Two of his older siblings had attended the University of Utah, but the family did not have enough funds to send another child there. During those childhood and teenage years, Brother Anderson recalls being a very shy, reserved student, but his teachers refused to let that hold him back. He was regularly called up to the blackboard to draw out long-hand equations—what he referred to as a “sweaty task.” He was particularly inspired by his English professor, David O. McKay. Brother Anderson discovered his passion for the English language, and this love of words set him on the right path to achieve greatness in his secretarial career, which many would say began when he was only ten years old as he served as secretary in his ward primary.

After his time at Weber State Academy, Brother Anderson went to work for a lumber company in Ogden at age 15. His wage was $15 each month—the same price as his room and board. He knew that this salary would not be enough to enable him to achieve his goals, so at 16 years old he headed to Salt Lake City in search of work. Employers were not accustomed to seeing an individual of such a young age with such a set of skills; the experience Brother Anderson had gained at Weber State Academy in shorthand, typing, and office work made him marketable and he found work as an employee of the Consolidated Wagon and Machine Company. His starting wage was $25 a month, and though he began in what was considered the most unpleasant position—bill collecting—he served with a jovial attitude and eventually worked his way to becoming secretary to the general manager of the company.

After six years in Salt Lake City, Brother Anderson was called to the Swiss-German Mission. He left for Switzerland in 1911, overwhelmed by the task of learning a new language. Though everything about his mission seemed daunting, he learned German rapidly, thanks to the gift of tongues. Brother Anderson returned from the mission field in 1915, and it was not long before he found his eternal companion, a young woman named Norma Peterson. They were married in the Salt Lake Temple six months after Brother Anderson had returned home to Utah.

In April of 1970, Brother Anderson was called to serve as the assistant to the Quorum of the Twelve Apostles. When this position was dissolved, Brother Anderson was ordained a member of the First Quorum of the Seventy. He served in this position until being granted emeritus status in 1978. In addition to duties serving the First Presidency, Elder Anderson served as the clerk of general conference. His expertise in shorthand was put to good use as he compiled the talks from conference and organized them for publication in the official Conference Report. Even after mechanical recording machines were put to use, he would still write talks out shorthand, not wanting one inspired word to be lost.

Brother Anderson passed away in 1992 at the age of 102. He is one of only two general authorities of the Church to reach the age of 100. His lifetime of integrity, honesty, and selfless service allowed him to be the best father, husband, secretary, and confidant to Presidents of the Church that he was capable of being.

Footprints on the Sands of Time