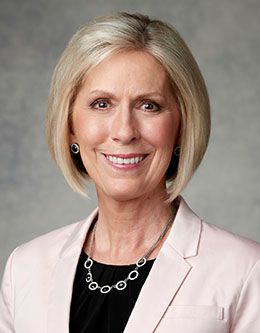 Sister Joy D. Jones serves as the 13th general president of the Primary for The Church of Jesus Christ of Latter-day Saints.

As a young adult growing up in The Dalles, Oregon, area, Sister Jones worked as a dispatcher for the U.S. Forest Service at the Redmond Air Center in eastern Oregon—sending out smokejumpers, suppression crews, and supplies for forest fires in the Northwest. She later served as an administrative assistant at the Federal Building in Provo and was also trained as a medical assistant and worked at a dermatology clinic in Provo. She received an associate of science degree in family living at BYU.

Sister Jones and her husband, Robert, lived for 14 years in Santa Rosa, California, where her husband opened a chiropractic practice. They then relocated to Draper, Utah—a community her husband’s ancestors helped settle. In 2009 she assisted in the open house for the Draper Utah Temple.

Throughout her life she has enjoyed many leadership opportunities within the Church in various ward and stake capacities in the Primary, Young Women, and Relief Society organizations. She served almost six years on the Primary general board. Sister Jones loves volunteering for Church welfare projects. “Service makes my heart sing,” she said.

“Look unto Him in Every Thought”