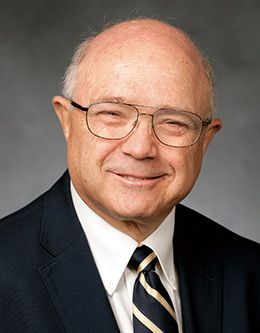 As a former BYU professor of counseling psychology and special education, K. Richard Young devoted his career to children and the youth. He has taught at BYU since 1998 and later served as dean of the McKay School of Education.
His teaching experience included 21 years as a professor at Utah State University. While there he was twice selected as Teacher of the Year—once in the Department of Special Education and again in the College of Education. He also served for seven years as codirector of the USU Foundation’s Institute for the Study of Children, Youth, and Families at Risk. In addition to teaching, Richard had a private practice as a psychologist for 23 years.
Richard holds BS, MS, and PhD degrees from the University of Utah. He was the principal of Jordan Resource Center, for stu­dents with emotional/behavioral disorders, from 1972 to 1978. During his career he has published two books, contributed to 12 book chapters, had 40 referred journal articles, and presented more than 180 conference papers.
Twice a bishop, Richard has served for over 30 years in Scouting and as ward Young Men president and in the stake Young Men presidency.
Richard and his wife, Janet, are the parents of six sons.