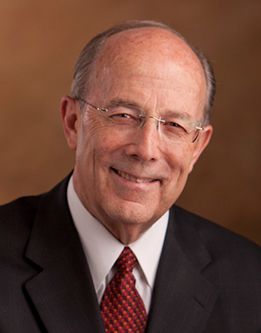 Keith B. McMullin was named as second counselor in the Presiding Bishopric in December 1995. He was granted general authority emeritus status in 2012. Since April 2012, he has served as the CEO of Deseret Management Corporation. He is a bank­ing and finance graduate of the University of Utah and, prior to his call to the Presiding Bishopric, served 20 years with the Church’s Welfare Services Department, 10 of them as managing director. He earlier had been with Ford Motor Company as an investment and financial analyst and had man­aged several small businesses.
Brother McMullin has served the church as a full-time missionary, mission president, bishop, high councilor, and stake president. He was born in St. George, Utah, and raised in the nearby town of Leeds and later in Salt Lake City. He and his wife, Carolyn Jean Gibbs McMullin, are parents of eight children.

Faith and Works in a Secular World